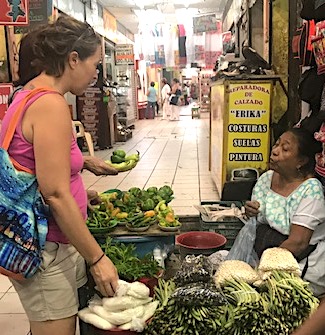 My move to Mexico was inextricably linked to my career in food. I met my husband in a restaurant kitchen after all, and soon after we made the decision to take our life together to his hometown of Merida. Being a chef is a big part of my identity, so leaving my career was a difficult choice. When I arrived in April 2014, the food choices were so unfamiliar that I found myself questioning my own culinary skills, and even my life path. It was jarring to say the least!

What I was experiencing was not unlike what many foreigners experience when in a foreign country for an extended period of time, a phenomenon most widely referred to as culture shock. It was brutally hot, my Spanish needed a lot of work, and I couldn’t depend on the skills that had previously allowed me to flourish in my career.

What is Culture Shock?

Culture shock is the sense of anxiety, depression, or confusion that results from being far from your familiar environment and norms when living in a foreign country or society. Feelings of euphoria (a honeymoon period), then irritability and discomfort are eventually followed by acceptance and adaptation. But while many things must be adapted to right away, food choices can be a way to hold onto one’s home culture. The pull to shop at a familiar chain store or the satisfaction of finding that favorite imported condiment is powerful. It can be a huge comfort to a foreigner in an otherwise uncomfortably unfamiliar place. What I have learned is that resisting that pull of home hurtled me past the discomfort phase. Seeking out local ingredients and dishes jump started the adaptation stage of my culture shock, and significantly upped my quality of life besides.

After arriving in Merida, I spent months stubbornly trying to make the meals I was used to making. I searched high and low for the right cheese for macaroni and cheese and lasagna. Nothing seemed to come out right. I was most certainly irritable. I made a decision to embrace the foods that had worked for the local population for generations. Instead of trying to mold this new place into a version of my old home, I knew I needed to mold myself, and my expectations, to find the sense of belonging I craved. This decision changed everything. I began bonding with my in-laws and neighbors, and with the market vendors I began to frequent. I had to eat every day, of course. Using food as my gateway into the culture of my adopted home meant I could connect to my surroundings on a daily basis. Deeper connection came as I developed my own tastes for local fruits and vegetables, spice blends and sweets and learned how to seek out those who knew them best. My Spanish improved as I sought more information, vendors recognized me as I returned again and again for the freshest Chaya or the juiciest sour orange. I cannot overstate how full my life became just by keeping my diet local.

Shopping almost totally local was a commitment, mind you. I wrote my share of bad recipes. I tried foods I decidedly didn’t like. My yearning for foods for home didn’t just disappear. But there were also triumphs. My famous Christmas Eve potluck contribution of 2019 that wowed my in-laws. That fifth try that convinced me I really did like that weird fruit my neighbor repeatedly gifted me. I reminded myself that if local people liked these things, then they were worth my exploration. I regained confidence in my cooking, partly because I just let the fresh ingredients I was using really sing. It made me feel good to eat what was grown in my state or on the peninsula. I even felt pride as a resident to learn the history of some of the local foods or to be let in on a secret recipe or trick by my sisters in law. Through food, I was able to become a part of this place, contribute to the community, belong in it.