Ep.03: The Herbaceous Life in Oaxaca 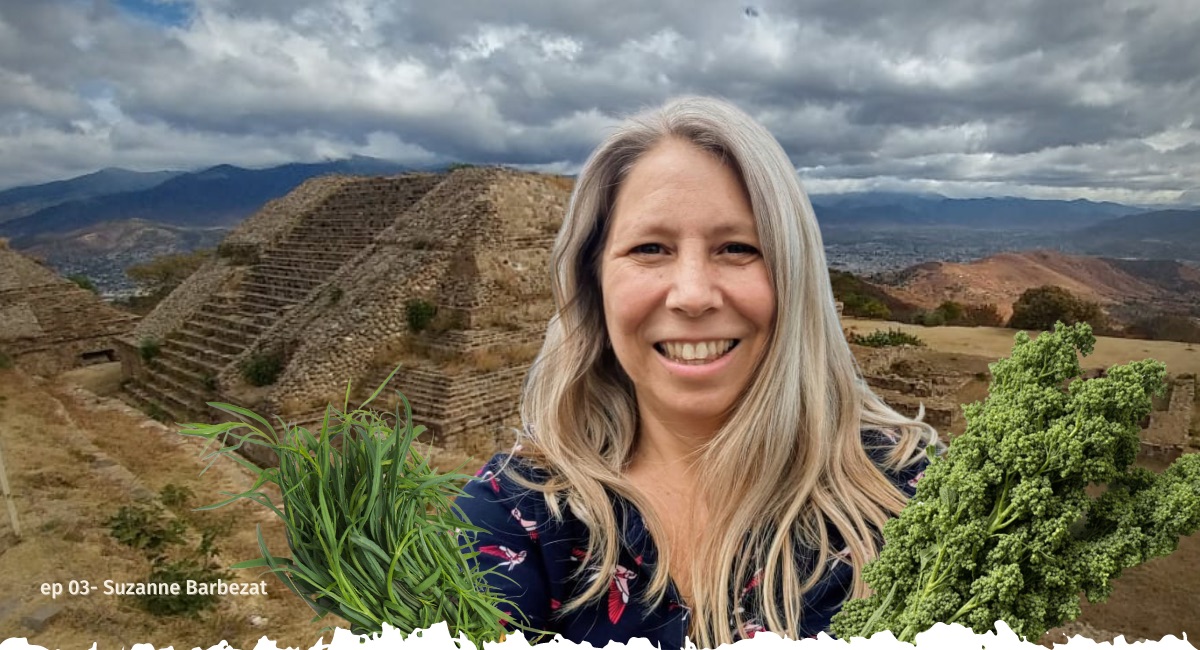 When Suzanne Barbezat left Montreal for an overland trip south to Mexico, little would she have known that a visit to the famed site of Monte Alban in Oaxaca would be pivotal in her life journey.

In the more than 20 years that she has been living in Oaxaca, Suzanne’s life has blended her studies of anthropology at McGill University with building both family and a thriving tour business, with her husband, a native Oaxaqueño of Zapotec heritage.

Being a vegetarian in Mexico can have its challenges, but as we hear from Suzanne, the region offers an immense variety of options… once you know where to look. Margret chats with Suzanne about how she learned about local ingredients as she raised her bi-cultural children, about some of the plant foods she recommends to tour guests, and how a green with a rich cultural history landed on a pizza.

Scroll down to learn a little more about some of the foods mentioned in the episode.

Chepiches as they are called in Oaxaca, are sometimes called pipicha elsewhere. Pápalo or papaloquelite, is a related herb. The two are similar in flavor – mint, anise with a pungency similar to cilantro.

Sopa de guias is generally made on water seasoned with regional herbs such as chepíl and hierba de conejo. Key ingredients beyond the squash vine and leaves are the bright golden squash flower, trozo de elote (slice or wheel of fresh corn cob) and often chopped fresh calabacitas or chayotes from which the vine came.

As mentioned in the episode, it’s pretty easy to find vendors who sell these ingredients all together in a bag, ready to add to a pot of boiling water, just chop the fibrous vine stems into short pieces first – they are tough, otherwise.

It is a vegetarian soup with the exception, usually, of the chochoyotes, dumplings made of corn masa traditionally prepared with manteca (lard) that get added to the soup. Serve instead with tortillas, fried in strips, if you like, for ease.

What else can you use the guias (vines and leaves) for? Add them to any stew or soup!

Huauzontles, a plant in the amaranth family (Chenopodium album) are well-loved as a nutrient-rich green. It goes above and beyond the benefits of kale, spinach and other leafy greens, as each of the tiny inflorescences contain the germ of the protein-rich seed of amaranth.

So Many Ways to Make Use of Huauzontles…

Take inspiration from Suzanne, pull the little buds off the stems, rinse them and scatter on a pizza or other flat bread before putting it in the oven!

Some other ideas (in all cases, pull the buds from the tough and wiry stems – you can also make use of the leaves) Note: if you are using them in a way that requires little cooking, you might want to blanch first in salted water.

Add to any taco or tortilla filling • Scramble some eggs and cook into an omelette or frittata • Add to a soup or stew as you would any other green • Blend into a soft cheese and layer into a lasagna-type baked dish • Blanch first and add to a fresh cheese • Make fritters, in a traditional fashion by adding a beaten egg, some flour and seasonings, and drop by spoon-full onto a oiled pan • Use them to enrich a tomato-sauce or even a creamy sauce.